10 Relationship Facts Everyone Should Know Before Getting Married

by Rahul Sharma
in Relationships

8
SHARES
120
VIEWS
Share on FacebookShare on TwitterShare on Whatsapp

The little things make all the difference. Love isn’t enough to sustain a happy marriage. You’ve got to take care of the tiny details and consciously make an effort to work your way up to a happy married life. Researchers have proved that you’ve got to be smart with the way you love your better half. So sit back with your lover and a glass of wine and take notes. We are about to make your married life simpler by presenting to you the ten most important facts that are vital for a beautiful married life. Engaged couples, this is for you.

It is literally good for the “MANkind”

Men really do benefit from getting married. A recent major study in America has shown that married men are way happier than single or divorced men. They also happen to live longer! So gentlemen, take notes, find the love of your life and tie the knot already.

Tiny arguments here and there are directly proportional to a healthy marriage.

In 2012, The Florida State University Researchers proved that arguments are actually important for a healthy and a happy marriage. Every person is unique. Differences are bound to occur between couples. The more vocal you are about your disagreements; the better is the sense of freedom in a relationship or a marriage. So gentlemen, “Leaving the dishes unwashed everyday is not acceptable”. And ladies “Expecting your sweetheart to get you gifts everyday is also not practical.” To name a few, that is.

The contagious case of a divorce

Choose smart, be patient and make the right decision instead of hurrying into getting married. A 2013 study published in the “Social Forces” journal found out that divorce is contagious and can spread like wild fire among friends and families. So if your BFF just got divorced, then chances of you getting divorced shoot up by 75%, statistically speaking. As the research explains itself, “Individuals who get divorced may influence not only their friends but also their friends’ friends as the propensity to divorce spreads.” On a lighter now, counsel your friend into never getting a divorce. For the sake of humanity.

Forget the comparison between single and hitched men for a second and consider this fact. Marriage, if nothing is at least good for the heart. A recent study by the New York University’s Lagone Medical Center, states that, In comparison to the single peeps, married people had lower chance of cardiovascular disease. Why you ask? It’s because it is strongly related to better emotional support and deeper social ties to family. This ensures lower blood pressure and consequently, keeps the heart happy and healthy. 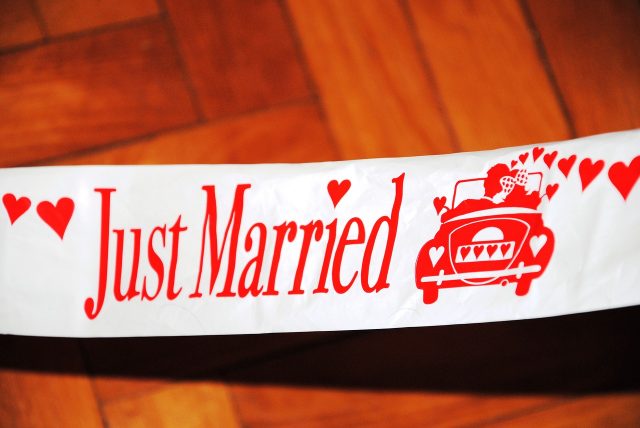 One of the top reasons of divorces is discussing financial related issues immediately after getting hitched. In a recent study, researchers at Kansas State University stated that early finance-related arguments are the top predictors of divorce. This also holds good for income and wealth levels. So, take a chill pill, sip on some good wine and get talking about the finances with your better half.

Rejoice in the glory of the big and the little spoons. A recent study from the University of Toronto found out that, even short periods of cuddling can majorly boost the levels of sexual and emotional satisfaction. This is especially good for women and parents of young children. Cuddling is also known to increase the dopamine levels. So cuddle your way to feel-good hormones.

Loving is sharing. And sharing is caring. Caring is sharing the household chores. As perfectly as it rhymes, it also is as much true. A study from the University of Alberta shows that couples who share the household tasks are more likely to have a super hot sex life. This leads to a greater relationship satisfaction and ensures that the couple remains “Busy”. *Cough Cough*

Go for marriage counseling as soon as you can!

Don’t wait for six long years before you go for a counseling session. Go sooner than that! No two people can ever be entirely similar. So, differences are bound to occur and arguments are bound to happen. Consulting a counselor will not only ensure that you sort out your arguments with your better half in a healthy way, but it will also save you from a huge amount of headache. Be smart and go to a counselor as soon as you guys get serious while the relationship is still sailing smoothly. While the things are still fine, book an appointment for a session so you are better equipped with unforeseen future arguments. Predict the hurricane already and take the required measures to keep calm.

You dare not roll your eyes. No contempt, please.

According to the marriage researcher, John Gottman, sarcasm, eye-rolling, name calling and other manner of contemptuous behaviors is the number one reason for divorces. “The four horseman of the apocalypse” include contempt, criticism, defensiveness and stonewalling (emotionally withdrawing from your beloved). These are the topmost predictors of a divorce as stated by Gottman’s study of forty years. So hey, make your better half understand with love instead of rolling your eyes at them or being sarcastic. Sarcasm would literally lead to a divorce and who wants that?

The honeymoon phase is a myth

Stop hanging on to the so-called fairy-tail phase and snap back into the reality of marriage because reality is much more beautiful than the honeymoon phase. According to researchers at Deakin’s University’s Australian Center on Quality of Life, couples are in their happiest phase after the first year of marriage. Icing on the cake? Newly married couples are less likely to be happier than couples who had been married for a long time. Let’s assume it’s the bonding hormones responsible for this magic. Melissa Weinberg, a lead researcher, attributed the newly married couple’s sadness to the “wedding hangover” – A feeling of sadness once the wedding is over and the actual marriage phase begins.

I am Rahul Sharma a freelance Creative Writer. The work that I do is the love of my life. I am not just passionate about Trending and Tech Stuff but in fact I am totally into it. The idea and conception of this blog came to me as a part of my quest to find the latest updates going around the web. Follow me on Twitter @Im_RahulSharma

So, you are on the verge of getting a divorce. While it might seem like the end of the world,...

What do you do if you are haunted by your ex? There is no need to run off and get...

Modern Family Is Not So Modern! It is Filled with Clichés and Racist Stereotypes

The 5 Best Cloud Storage Services for Startups in 2019

Top Secrets of Maximizing Your Website’s Value before Selling It

How To Make Yourself Smarter With Delicious Food

Introducing The Eighth ‘P’ In Marketing: Why Partnerships Are Now A Vital Piece Of The Puzzle

The Summer Essentials Your Wardrobe Can’t Do Without

Blogging VS Vlogging: Which is Better for Making Money Fast

A Look at the Most Harmful Mobile Apps for Children